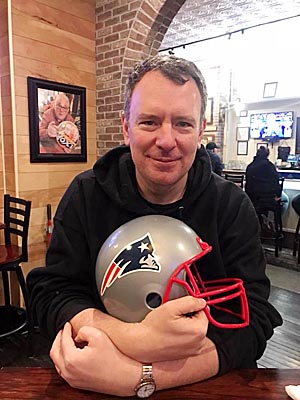 Peter N. Dudar was born in Albany, New York on February 12th, 1972. Raised in the neighboring town of Latham, Peter was educated at Christian Brothers Academy, and received his Bachelor of Arts degree in English from the University at Albany. Upon matriculation, he relocated to Maine in 1995, working the graveyard shift at the United States Postal Service and beginning his writing career during his free time.

By that summer, Peter was living in a studio apartment in Portland’s Old Port district. He spent those first two years away from home serving out a true writer’s apprenticeship, devoting all his free time immersing himself in reading classic horror novels and pounding out dozens of short stories on an old Panasonic word processor he borrowed from his fiancée, Amy Harriger. During that time, he also accrued hundreds of rejection letters from some of the biggest names in genre publishing. He wrote two failed novels along the way, and nearly abandoned his writing career. But in that time during his inhabitance of the Back Bay Apartments on Oak Street, a magical thing happened; he found his voice as a writer while penning his novella The Angel of Death.

Peter and Amy married in 1997 and relocated to the Princeton Properties Apartments off the Back Bay. By this time, he’d written nearly fifty short stories and a third failed novel. These were the transitory days where writers saw the end of submitting manuscripts through “snail mail”, and social media was still done through message boards on genre websites. During this phase of his career, Peter enrolled in several creative writing courses through Portland’s Adult Education program, and honed his writing and editorial skills. By 1999, he sold his first story, “Trailertrash Annie” to the HWA anthology Bell, Book and Beyond, which saw publication in 2000. He’s been writing and publishing ever since.

His novel A Requiem for Dead Flies was published in 2012, and was nominated for a Bram Stoker Award™ in the category of Debut Novel. By 2013, it officially became a finalist, losing to the book Life Rage, penned by his friend and mentor, L.L. Soares. Peter continues to write and publish books and short fiction, with his work appearing in several award-nominated anthologies and fiction ezines. He has also penned a film review column for the now-retired website Cinema Knife Fight, a blog on WordPresstitled “Dead By Friday”, two unpublished memoirs chronicling the adoption of his daughters, and secretly writes and publishes erotica under the pseudonym Manlius Latham.

Aside from his writing, Peter spent two years cohosting the 80s music show Radical Static on Portland Public Radio, acted in the Maine independent films Monster in the Woods and 2 (he is credited as “Zombie Shemp” on IMDB), and continues to do reading events and book signings throughout the state of Maine. Peter is a proud member of the New England Horror Writers, the New England Speculative Writers, and a founding member of The Tuesday Mayhem Society, a local author’s collective centered in his hometown of Lisbon Falls. You can find him on social media at Facebook, Twitter, and Instagram.