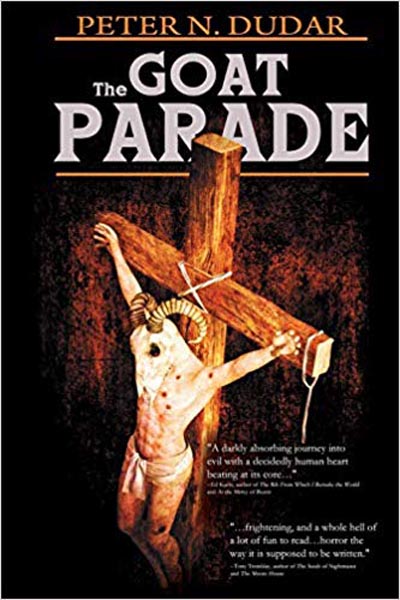 The city of Portland, Maine, is preparing for a parade to end all parades, one that will usher in a thousand years of darkness. The only thing is, they don't know it.

Four strangers will engage each other on the Devil's battlefield and fight not only for the future of the city, but for the entire world.

Warren Pembroke, Satan's Chosen One. He has been charged with making sure everything goes according to the Dark Lord's plan.

Svetlana Barnyk, a gypsy street performer cursed with the Gift of Sight. She lives in fear of the day when Zee Doctor will return to reclaim the gift he bestowed on her.

"Tobacco Joe" Walton, an ex-con who served a 43-year term for committing a savage crime in the name of Justice. He is seeking redemption, but Ol' Scratch has other plans for him.

Erik Marsh, a crime beat reporter driven to the edge by the atrocities man has committed against his fellow man. All he wants is to preserve his sanity and spend time with his son.

Will they be able to defeat the Devil and stop the Goat Parade, or will the world be plunged into an age of darkness and endless suffering?

Praise for The Goat Parade:

"A darkly absorbing journey into evil with a decidedly human heart beating at its core, The Goat Parade is a rich and rewarding story that is evocative of the best of Bentley Little. Peter N. Dudar has crafted a gripping supernatural thriller worth every sleepless night it may visit upon its readers."
— Ed Kurtz, author of The Rib from Which I Remake the World and At the Mercy of Beasts

"The Goat Parade is a wild, harrowing rollercoaster ride that takes you from blues clubs to gypsy carnivals to the darkest corners of the human soul. Filled with colorful characters, occult rituals, and more twists than a '50s dance hall, this book will latch onto you and not let go. If Americana horror was a genre of its own, Peter N. Dudar would rule it."
— Morgan Sylvia, author of Abode

"Violent and bloody, The Goat Parade barrels along like a freight train. Literate, yet raw, I found it to be frightening, and a whole hell of a lot of fun to read. This is horror the way it is supposed to be written."
— Tony Tremblay, author of The Seeds of Nightmares and The Moore House