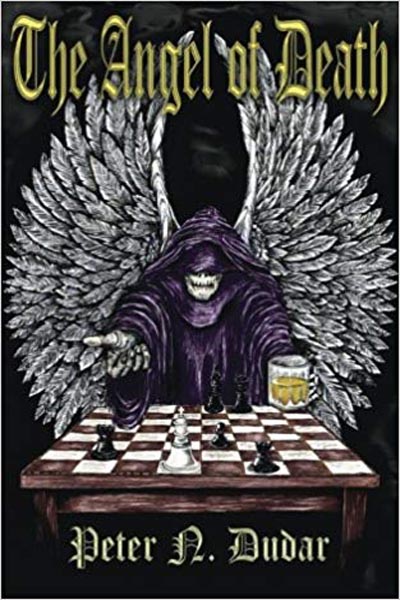 The Angel of Death
by Peter N. Dudar

Everyone has done something evil.

Frank is planning to murder his ex-wife. Working a construction job by day and driving a cab by night, Frank is slowly falling apart just trying to make ends meet. He’s poisoned by the toxic relationship with the mother of his children; all for the sake of staying in their lives. But the more he gives, the more she takes away, until he’s stripped of everything. And when she finally files the restraining order to keep him away from his kids, Frank is pushed over the brink of sanity. The ex-Mrs. Blake deserves to die, and Frank buys the gun and puts his plan into motion.

Malcolm owns a bar in downtown Portland. In his decades of running MacAuley’s of Scotland, he’s seen every form of sin and iniquity the city has to offer. But Mal has his own sins to hide from. His past life as a World War II pilot, and the death of innocent people he inadvertently caused has always haunted him. It’s been the catalyst for his downward spiral of sin and degradation. Until he realizes that he’s marked for damnation. A man can only live so long and run so far from the past…

Both men are on the brink of darkness until the Angel of Death pays one of them a visit. Salvation is at hand. But how far will one man go to save himself? Can he save his friend from the very same fate?

Praise for The Angel of Death:

"Peter Dudar's The Angel of Death is a rich, engrossing story of vengeance and hatred and the toll it can take on the soul of a good man. That's the short version. I don't want to ruin a second of your enjoyment of this story, so I'm not going into depth about the plot, etc., but Dudar is a strong writer with a nice touch for detail. Frank, the main character, is drawn so well, I felt like I'd had a beer with him one night or even ridden in his taxi. His friend, Mal, is no less defined, a man tormented by sins he chose and some he could not avoid. As a reader, it was difficult to read Mal's story, because I wanted to like him. Dudar makes it damned hard, by drawing such a vivid picture of a man who, for many reasons, can't seem to get away from evil.

This story is a must for fans of noir fiction as well as horror. Dudar has a deft hand with the delicate dance between evil and good and that's the key to the whole story, to me. Any of us can choose the wrong path, among the thousands of paths we have before us. A good lesson to learn."
— Lori Safranek, author of Freakshow: The Complete Freaked Out Series

"This short story about death (and life), was amazing. Peter Dudar knows how to get a story going and draw the reader in quickly, and The Angel of Death did not fall short on that. The story, on the surface, appears to be about the Grim Reaper, until you get a little ways in and find it to be much more than just that. This story touches on life, death, religion - it's unbelievable yet COMPLETELY believable.

Peter has outdone himself again on another wonderful story. Check it out!"
— Darby L. May